Latency based routing in AWS

Distance affects performance, going further away latency can easily reach a third or half of a second for a round-trip. This could be a bummer when you serve customers globally. Luckily there’s..

Global Accelerator solves a few common DNS problems1 as it’s not relying on IP address caches. It has 2 static IPv4 addresses as a single entry-point for users to connect through and there’s no DNS configuration for you to maintain.

As the IPv4 addresses are announced from AWS its globally distributed edge locations, your traffic can enter the AWS Backbone network as it’s faster to route traffic via edge locations then traversing large parts of the internet.

Global Accelerator uses BGP (Border Gateway Protocol) Anycast to route traffic over multiple paths (edge locations) to its destination. I could explain you how BGP works in layman’s terms, but I rather re-use Luc van Donkersgoed his wording, as I like the way he explains it.

“A BGP announcement is - ignoring its many technical intricacies - a way for routers to announce to other routers ‘I am able and willing to receive traffic for these IP addresses’. When another router, for example at your internet provider, receives traffic for one of these addresses, it will forward it to the router that announced it and process that traffic. Every time a packet moves from one router to another system, it’s called a hop. Every hop costs processing time, so fewer hops means lower latency.. "

Perhaps there’s a way we can visualize this, it might just all sound really abstract, right? Just remember that Global Accelerator routes your traffic over the most optimal edge location path towards its destination. 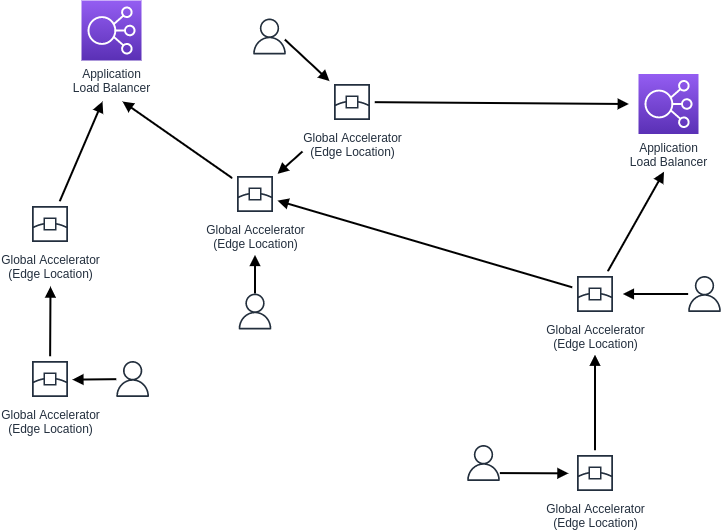 It’s important to note that the AWS Backbone network is very efficient and has dedicated fiber lines that allows for fewer hops between countries and continents. You’ll use your local ISP to connect to the edge location instead of using your local ISP to route all the way to a certain address which might take a very long time including many network hops that can each introduce a risk.

With latency-based routing, Amazon Route 53 can direct your users to the lowest-latency AWS endpoint available. You might run an active-active architecture where your stack spans multiple regions (this can be done for disaster recovery and/or latency advantageous). The Route 53 DNS servers decide2, based on network conditions of the past X weeks, which instances in which regions should serve particular users. I currently live in Amsterdam, if company X decided to implement latency-based routing and had their stack running in both Ireland and Mumbai, I would likely be directed to eu-west-1 and a user in Japan would likely be directed to ap-south-1. 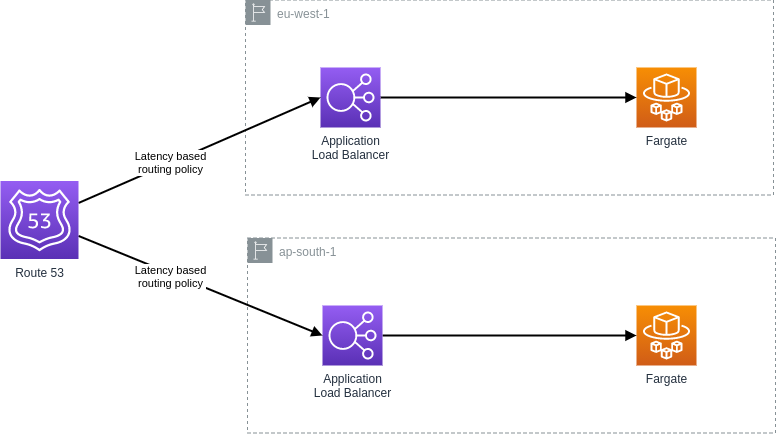 So, how does this really differ from geolocation based routing policies?

Now there’s more than just a subtle difference in these routing policies, we now need to ensure something. Which we can’t do with latency-based routing, there might’ve been multiple router hick ups on our network path resulting in some requests being offloaded to ap-south-1 (that would violate our agreement). Now we could solve this additional requirement by using Geolocation based routing, it allows Route 53 to route the traffic to the resources according to the geographic location of the source query. Latency-based routing is based on latency measurements performed over a period of time, and the measurements reflect these changes. A request that is routed to ap-south-1 region this week might be routed to the eu-west-1 region next week.

When to use which?

Good question, no clue, lets figure out. We already know that Route 53 latency-based routing makes use of DNS telemetry and network latency to return the best latency record for a given query. Therefor it spends more time on the ISP network and the Internet than the Global Accelerator does.

Perhaps this little mnemonic will help you keep this in mind.

So the Global Accelerator spends more time on the AWS Backbone network. We can therefor conclude that if you’re running a multi-region architecture, you have to consider the distance between clients and resources and the number of regions your stack runs in. If it’s just a few regions, Global Accelerator performs better when it comes to routing traffic as the packets spend time on a better network (Backbone).

BGP Anycast can be slow to respond to network events such as link failures. Networks have to propagate BGP updates when conditions change. Luckily as earlier explained, Global Accelerator providers us with 2 static IPv4 addresses, and these will be served by diverse paths. The nice thing about having static IPv4 addresses is that clients can hardcode the static IPs in their DNS and firewall configurations, and use ordinary client retry behavior to drive the fault-tolerance.

We now know that latency-based routing uses constantly-running network latency measurements to figure out the best AWS region to send your traffic to. If your stack runs in many different regions, Route 53 sounds like the preferred option (as we would have just a few hops before reaching Route due to the small distance between clients and resources). Compared to the BGP event propagation Route 53 uses DNS health checks to respond to network events. These health checks are often faster than BGP Anycast.

Be aware that Global Accelerator performs TLS termination at edge. This is very useful as now the 3-way handshake happens at the edge location instead of the DNS server. Also, a little tip, increase the DNS TTL when using Global Accelerator as it’s a static IPv4 address.